How To Watch Ward VS. Kovalev 2 Fight Online Live Streaming From Anywhere 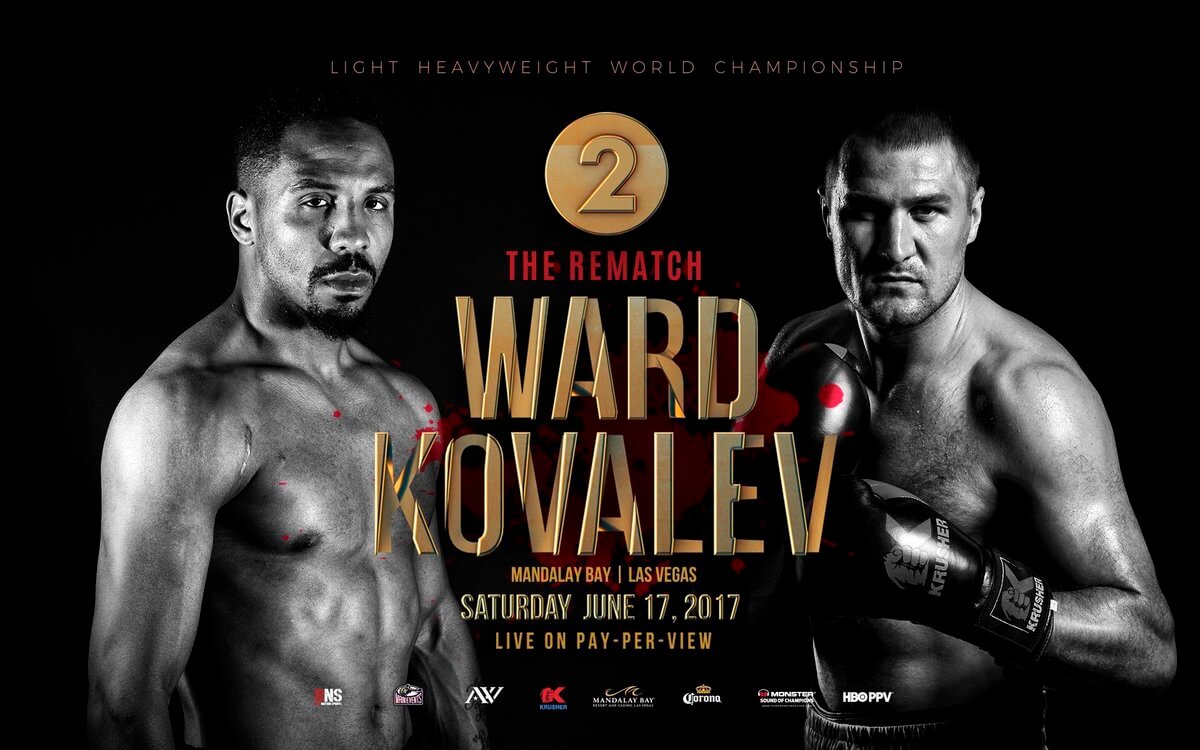 This Saturday, 17th June 2017, at the Mandalay Bay Events Centre in Las Vegas, Andre Ward, and Sergey Kovalev are going back in the ring for the second time to fight for their honor and prestige that was being questioned for all this time after their first fight back in November 2016. Ward VS Kovalev rematch is the most awaited bout demanded by the fans, critics, and parties on both sides because it was a win by Ward through unanimous decision and fans and boxing experts weren’t convinced by the decision. Kovalev lost all his WBA, WBO and IBF light-heavyweight titles to Ward. Will he be able to reclaim his lost glory?

Andre VS Sergey rematch is a PPV event that is to be presented by HBO in the US and you can buy the Pay-Per-View by either visiting HBO’s official website or contacting your local cable provider.

In this guide, we’ll let you know how you can watch Ward VS Kovalev II live online from different countries or outside US to be specific as HBO is the official broadcaster and only people accessing HBO from within US can watch the bout. But, we’ve cracked the code on how you can watch Ward-Kovalev 2 fight from anywhere in the world and some other channels that’ll be live streaming the fight.

But, first, let’s get our stats right:

Ward vs. Kovalev 2 Fight Details At A Glance

Both the fighters are the best Pound-to-pound fighters in the light-heavyweight division. Andre Ward is currently undisputed and the reigning champion. Sergey Kovalev has only lost one fight in his career and that was against Andre Ward back in November 2016. Here are the super-impressive stats for both the fighters: 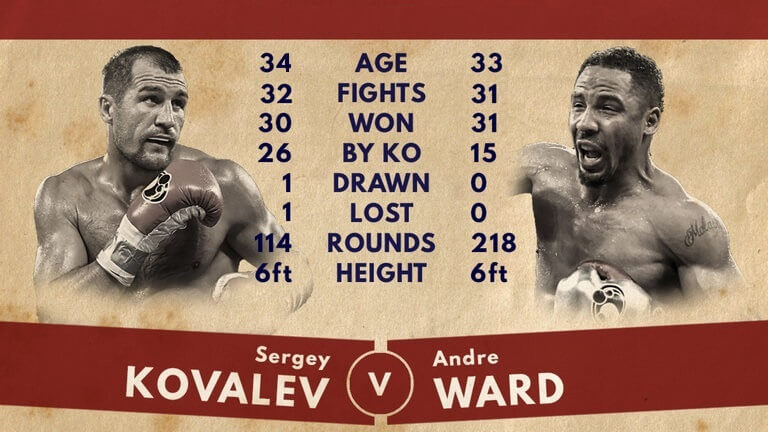 Ward vs. Kovalev 2 Preview Show: HBO Boxing (US Viewers Only)

How To Watch Andre Ward VS. Sergey Kovalev II On HBO Outside US

Ward VS. Kovalev 2 fight is a PPV event that’ll be broadcasted live on HBO. But HBO is blocked outside of US and if you try to access even the fight event video on the official fight page, you’ll see this message that’ll leave you helpless: 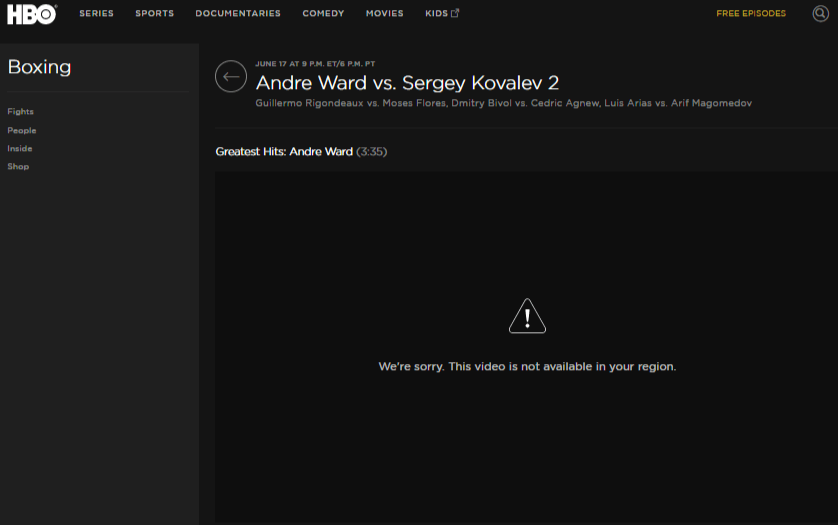 But don’t go all bonkers after seeing this message as there is an instant way you can watch Kovalev-Ward 2 fight online from anywhere in the world with a VPN. Yes, by using a VPN you can get connected to a US server and watch the fight on HBO or any other geo-restricted channel like a local.

Here’s how we were able to access HBO outside of US by using a VPN: 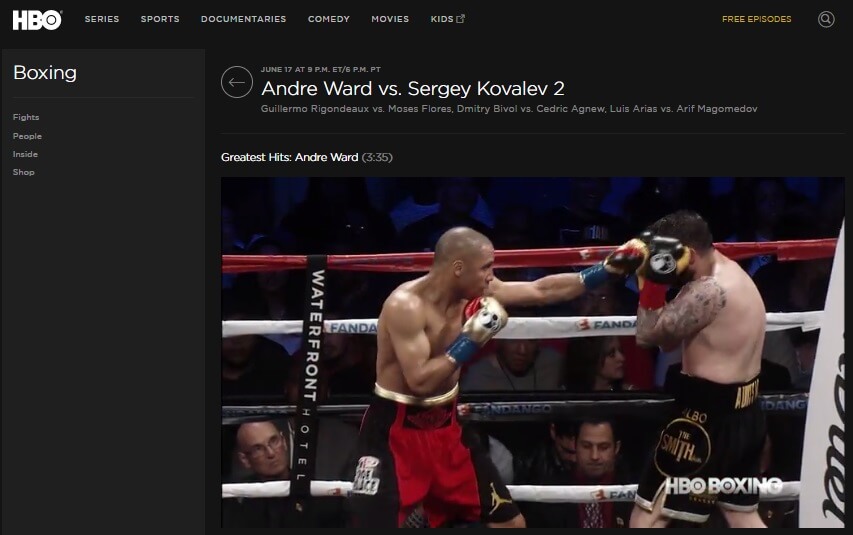 Now, this is a just a preview video that we've given reference of, but it’s actually used to explain that by using a VPN you can access HBO and watch the bout as it happens. Here are the simple steps to watch Andre Ward VS Kovalev 2 fight: 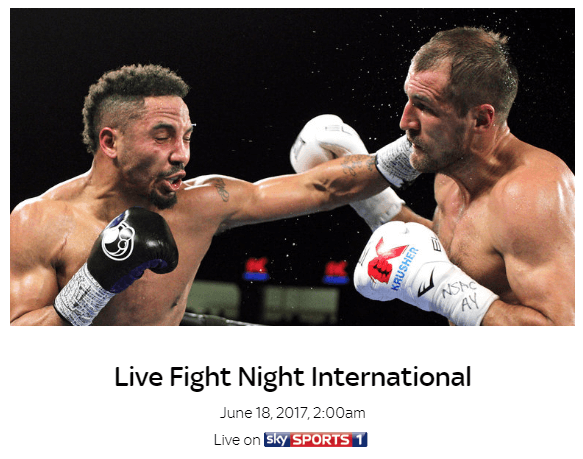 You can watch Kovalev VS Ward 2 fight live streaming on Sky Sports easily if you are residing in UK. But if you are living outside UK, you’ll not be permitted to watch the most awaited boxing rematch of this year. So, the trick here is again very simple; just use a VPN and connect to a UK server and watch the rematch between the two fighters from anywhere around the globe.

Ward is quick and his punching accuracy is deadly. One of the most dangerous hands in boxing. One he gets the rhythm, he destroys his opponent with those steady body shots. But Sergey, on the other hand, is known for his ferocious power punches. Let’s see how they both compare: 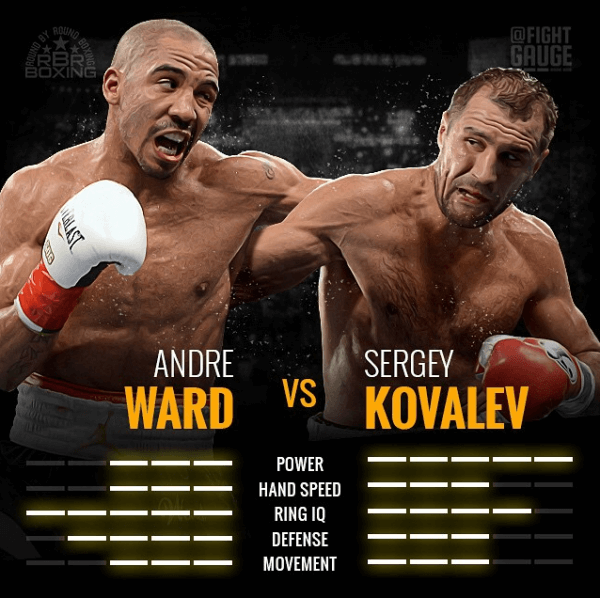 *Do you think this fight gauge depiction is accurate? Share your thoughts with us in the comments section.

Andre Ward is one of the top fighters in boxing and this match is the proof that he’s the best light heavyweight in boxing. Sergey Kovalev was definitely shocked for the first time as Andre snatched Kovalev’s titles from him. Here are the best moments from their first fight:

A Cinematic Analysis On The Andre Ward VS. Kovalev 2 Fight From Fight Promo

Ward was reported to have earned around $5 Million while Kovalev had earned around $2 Million. But stakes are already pretty high and you can expect this amount to get a lot higher in this rematch.

So, Are You All Pumped-Up To Watch Ward VS Kovalev 2- One Of The Biggest Boxing Rematch Of This Year?

Now you know how to watch Ward VS Andre 2 fight online from anywhere on different streaming channels, and we are sure that every boxing fan is desperately waiting for this fight. Andre VS Kovalev first fight created a lot of drama and controversies. Both the fighters showed great respect for each other but at the same time fought like they are each other’s nemesis. The fight went on for 12 excruciating round and Ward won the fight by unanimous decision. So, Kovalev is now back to take back what Ward has taken away from him; his titles.

Who do you think would win the fight? Kovalev or Andre?

What’s your prediction? Share it with us in the comments section below: