How To Legally Watch Shooter Season 2 Online Outside US

Shooter Season 2 is coming back on USA Network with the first episode ‘The Hunting Party’ releasing on 18th July 2017. The first season of Shooter TV series was supposed to air in July 2016 last year but was postponed until November because of the mass shooting in Dallas, Texas.

Shooter quickly became one of the most famous shows of USA Network with numbers surpassing even the top most TV shows like Mr. Robot and the mainstream show, Suits. Well, now the real question is “Will Shooter Season 2 be able to create the same impact and generate the same viewership that it garnered in the season 1?”

Well, as the Shooter Season 2 have taken a new vibe and Suits Season 7 just kicked off from 12th July, USA Network is the channel you want to tune in. But the biggest hurdle to watch USA Network online is that it’s only available in US, and if you try to access it outside of US, you wouldn’t be able to stream any show because online streaming of Shooter Season 2 or any other TV show is restricted to US only.

Well, if you are a fan of Bob Lee Swagger and living outside of US and is desperate to watch Shooter 2 from episode 1 till the very end then use a VPN. Yes, it’s that simple. No gimmicks, no shiny talisman or any hardcore technical stuff. Use a VPN to connect to a US server after which you’ll be assigned a US IP address, which legitimately makes you a US netizen. Just follow the below mentioned simple steps to watch shooter season 2 from outside of US:

If you want to catch up with the latest episodes of Shooter Season 2 on your mobile devices then download the US Now app and get unlimited access to the streaming of all the TV shows available on USA Network. But in order to access the app, you need to verify your credentials which established the fact that you’re already paying for the cable subscription to watch USA Network channel. But if you’re one of those cord-cutters who’ve sworn to stream Shooter Season 2 on other streaming channels and don’t prefer TV that much then scroll down to learn about another method to stream Shooter Season 2 online. 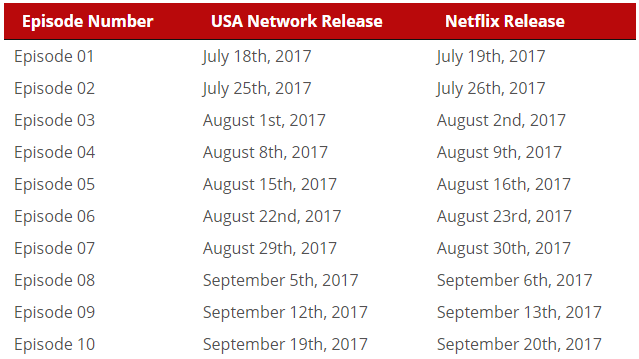 All Excited To Stream Shooter Season 2 Outside Of US?

Now, you have the basic concept of how to stream your favorite TV Show, Shooter outside of US on both the official channel and on Netflix. So, make full use of VPN to watch the latest episodes. Shooter Season 2 is inspired by both the book and the movie. The story this time again would revolve around how Bob Lee Swagger defends himself against the crimes he didn’t commit. So, don’t miss a single episode as they are all going to be pretty damn exciting.