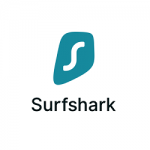 Surfshark offers unlimited device support with AES 256 encryption and No log policy. It houses 800+ servers and private DNS and leak protection and camouflage mode. It also offers kill switch and is torrent friendly and works with Netflix.

Surfshark is a new entrant to the VPN market. It has a low number of servers which are said to be increased in the coming years. The VPN based VPN provider is reported to have inconsistent speed. Moreover, it doesn’t offer a free trial.

Started in early 2018, Surfshark is located in British Virgin Island and has the potential to be one of the best in no time. It has a strict no log policy and offers advanced 256-bit encryption. Although Surfshark lags with inconsistent speed.

Surfshark – An Overview of the Product

Surfshark Pricing Plans – How Affordable is it?

Just like many of its competitors, Surfshark offers three different pricing plans. 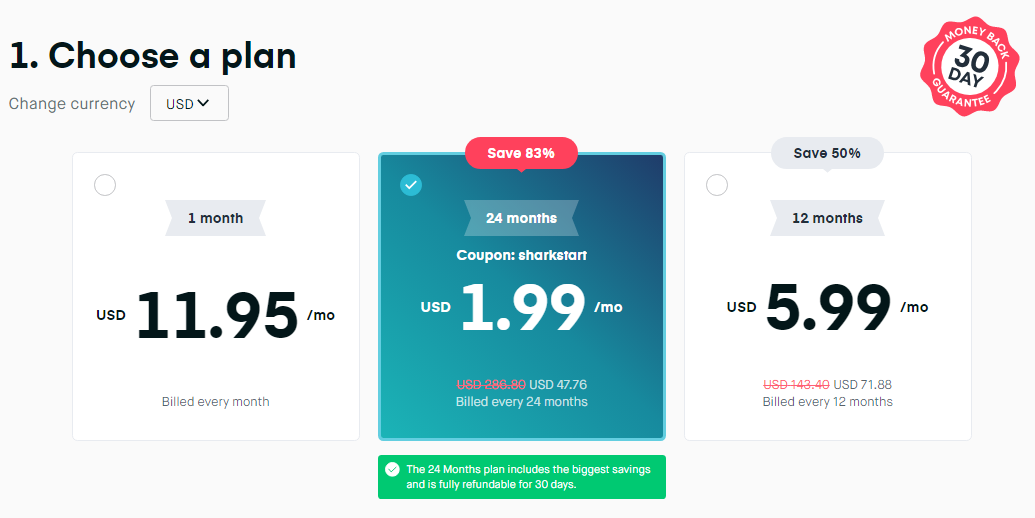 The pricing is where Surfshark amazes us all. It is home to a number of astounding features that do come at a premium price.

Their 2-year plan cost $47.76 which means you will charge $1.99 per month. If we compare the yearly plan which cost you $71.88, almost double the cost of 2 years plan, who would want to buy the yearly one. It is a very confusing marketing tactic, if speaking honestly.

It is glad to see that a newcomer in the VPN industry has focused on anonymous payments. This is indeed applaudable.

The VPN advertises a 30-Day Money Back Guarantee. We think that 30-Days is enough for an individual to test if the VPN is best suited for him or not. Since they don’t have a proper refund policy on their website so we asked customer support about it and here is the response.

Upon asking if there are any conditions for the refund the customer service agent Dennis replied;

“No. Unless users are violating our terms of service.”

Jurisdiction within British Virgin Island – Away from 14 Prying Eyes

The 14 Eyes is referred to an alliance of 14 countries which agreed on intelligence sharing and collection of user’s data under their jurisdiction.

The VPN’s geolocation thus makes a huge difference as intelligence and government officials might knock anytime at the VPN provider’s door asking for user’s data. The bad part is that a VPN provider can give all your private information without your consent.

With that said let's discuss Surfshark as to why we are glad that it is located in British Virgin Island.

The island does not have any data retention laws and is away from the 14 eyes. This means Surfshark’s user data is safe and secure.

Logging is considered nothing less than a crime in the VPN world. One thing that is common in all leading VPNs in the market is their strict no logging policy. 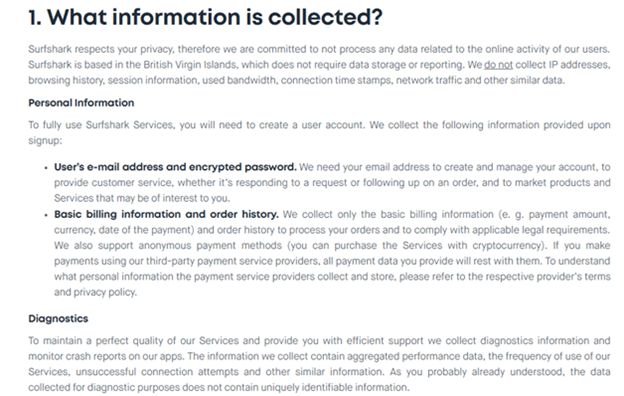 Internet users are often found whining about their internet privacy; gladly this is where Surfshark is trustworthy. As per Surfshark’s privacy policy, they collect no logs. Although this sounds pretty unrealistic, but as there are no proofs of any data breaches, we considered the claims ‘TRUE.’ Surfshark only collects the following information of user which doesn’t cause any direct or indirect threat to your privacy online.

Upon extensive research, we didn’t find any scandal of the product and can conclude that it is safe to use Surfshark as it has proved its way to be a trustworthy VPN.

Their Kill Switch feature is available on Windows, Mac, Android and iOS which comes in real handy when the internet connection drops.

Nobody can deny the fact that VPN works best with routers. However, a VPN that works with routers is only a few. Luckily, Surfshark is compatible with routers and offers support with OpenVPN protocol.

A tor browser is free and is simple to use. It adds up the anonymity of the internet user. It can do wonders in terms of online security when it is combined with a VPN.

If you want to step up the privacy game, then you can consider using TOR over Surfshark VPN.

It is an excellent feature and not offered by many VPN providers. Using this feature a user get more anonymity as his/her traffic passes through two VPN servers at the same time. For example if you connect to one New York server, your traffic will first passes through New York server and then further pass through another server, let's say, Paris. In this entire journey your IP will stay of USA server.

This British Virgin Island-based VPN has a zero Knowledge DNS which is capable of keeping its users secure in case of a DNS leak. It is amazing to see how Surfshark has incorporated every premium feature in their arsenals. 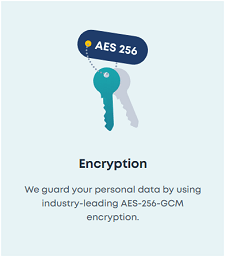 Surfshark offers secure VPN protocols that include OpenVPN and IKEv2. Moreover, it doubles it with the strongest encryption ever “AES 256bit.”

It is of no surprise that this VPN does not offer PPTP or L2TP protocols. Reason being that these protocols enjoyed their tenure and now there are more robust and reliable protocols available in the market. The VPN company thought irrelevant to add these two in their protocols arsenal. However little they do know that PPTP while being the less secure is the fastest among the rest.

It looks like the company had security at the top of their mind; they don’t want to compromise on it whatsoever.

The VPN provider did not offer much in the early days; it merely had an app for Android and a few browser extensions. But today as we review Surfshark it has been literally transformed and has added new and improved apps and to his tally.

Here is a list of dedicated apps for the following platforms.

Surfshark boasts about its secure and high-tech protection. It also claims that it bears no cracks and will never allow your information to be leaked nor compromise on your IP address. Upon testing it for some common leaks, we found out that it is completely free of any leak whatsoever and does a great job masking your geolocation. This is rest assure as its efforts to keep your IP address and your private connection secured.

Surfshark Netflix – Can You Stream and Bypass Geo-Restrictions?

There are a ton of VPNs that fail to give access to geo-restricted content on Netflix. The streaming giant Netflix has even banned a lot of VPN’s server which is why a few claim to work on Netflix.

We tested six servers of Surfshark for Netflix and were quite amazed to see that all of them worked. Here is a snapshot just in case you are wondering.

The VPN has a torrenting policy that explains how you can download torrents and also answers frequently asked queries. 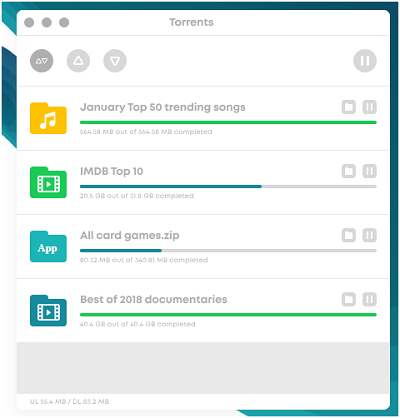 This is good news for torrent freaks, as it provides unrestricted access to almost all of the torrent content online.

Their live chat support is responsive and well capable of answering any query in mere seconds.

As for their skill, we must say that they know quite a lot about what they are selling. They try their best to give a straightforward but elaborated response. Before writing this review, we asked more than a couple of question one after the other and were quite satisfied with their response and how they dealt with a random user online. 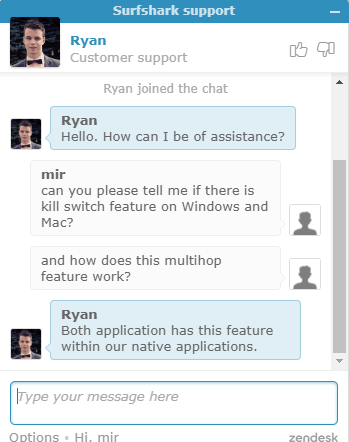 When asked about their multihop feature which may sound a little confusing to a tech layman they responded in the simplest fashion. Have a look; 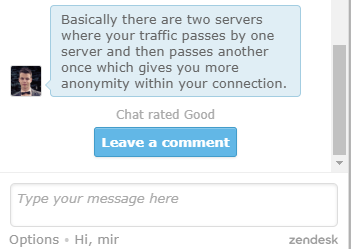 With all that said, here is our verdict.

Yes, we do recommend Surfshark because it delivers complete anonymity at an affordable price.

Surfshark is a secure, private and affordable solution to your online privacy. Their live chat support is responsive and very helpful. Moreover, it comes at a very nominal price with features that are only found in the market’s best.

The only problem with this British Virgin Island VPN is the inconsistent speed and the less count of servers. We believe that the VPN provider will address these two notable flaws in the product and will soon come up with a solution.