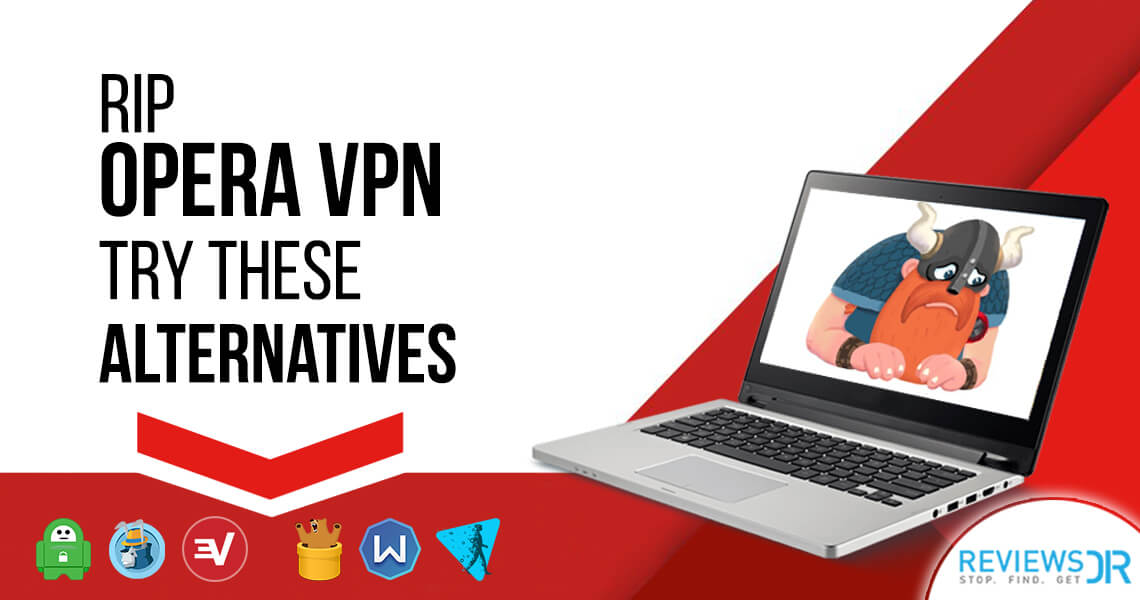 Hey VPN geeks, especially Opera VPN mobile netizens! The news of shutting down Opera VPN apps has already reached you, but this is not as important as considering the best alternatives. Our digital life is restricted without the presence of the best VPN, so if one gets down we should immediately switch over to the next best alternative; only if you know the perfect match. To ease your life, we are come up with some other best fishes of the VPN pond; listen to our experts’ advice and grab one of the best Opera VPN alternatives from the given options.

Before moving to the Opera VPN alternatives; let’s recall what happened with Opera VPN that lead to the closure of its dedicated apps.

Story Behind Opera VPN Shut Down

The closure announcement made that the free Android and iOS apps will be permanently shuttered from April 30.

Opera Gold members has given the option of having a free one-year subscription to SurfEasy Ultra VPN; it’s an obvious move, as Opera VPN was built on the SurfEasy network. Opera noted that SurfEasy Ultra has 28 regions, allows five simultaneous devices, and has a ‘strict no-log’ policy.

What about free users of Opera VPN? The company is offering 80% discount on SurfEasy Total VPN, bagged through the latest version of the Opera VPN Android and iOS apps. Opera VPN apps were for both – paid and free members; so you must be looking both ways. Don’t worry! We have got you covered;

Intelligent users know the hidden costs of free VPN providers, therefore, they avoid free VPNs; don’t forget that the price may be free, but the services need to turn a profit somehow, whether via ads or via selling your data to third-parties.

Want to switch to a paid VPN service? Here are top three VPNs with the fastest servers.

ExpressVPN is an all-rounder and our most favorite VPN, why because of the impressive performance, support almost all the platforms (mobile client is superb, Netflix-friendly, allow torrenting, tech support is phenomenal and many other strengths to consider. ExpressVPN is a cutting-edge VPN with fastest servers, loaded with impressive features including unlimited bandwidth, speed, high-end encryption & many more.

Private Internet Access is a US-based feature-rich VPN with affordable pricing packages, topped up with a humongous number of servers and anonymous payment options. Subscribe PIA and enjoy unlimited bandwidth and no logging policy; disturb the service support 24/7. However, it lacks money back guarantee and a free trial.

HideMyAss is an affordable VPN that offers a flexible 30-day money back guarantee. Connect your VPN-friendly devices with HMA and get a chance to use PPTP, L2TP, OpenVPN & other protocols across 190+ VPN servers in 190+ countries & unlimited logins. However, you can’t avail free trial, but zero-logging policy & courteous customer support; ideal for quenches our VPN thirst.

NordVPN let’s you connect up to six simultaneous connections with a single subscription to access its huge servers network around the world. The company keeps no logs of connection metadata and keep your data protected with leak protection, high-end encryption, and an app-specific kill switch. NordVPN also unblocks Hulu, BBC iPlayer, Netflix, Amazon Prime Video, and other restricted content.

CyberGhost is a Romania-based VPN provider that is rapidly expanding its service. With this Opera VPN alternative, you can choose from a network of servers based on your plan to use the VPN, rather than randomly selecting a location. Use this VPN to unblock sites like BBC iPlayer, Netflix, and Amazon Prime Video; it is also armed with uncrackable encryption and security standards, including a DNS leak protection and kill switch.

Cruising ship to SurfEasy is far from your only option. If you want other quality free VPN services with mobile apps, then it’s worth checking out our top picks for best free VPN 2018.

TunnelBear is a novice-friendly VPN that scores highly on the privacy front, which is always considerable, but get ready for a stingy limit of 500MB/month, tweet and get 1GB more, problem solved! This VPN is a perfect match of Opera VPN as this offer both free and paid plans.

Looking for a secure VPN for your beloved PDA, Windscribe is the best option with an ad-blocker and firewall. Enjoy 10GB/month and more with referral and also access Netflix, with some nifty extras.

Hide.me is a middle-of-the-road service, follows the generous privacy policy and the robust technology. Its clientele is not that pretty, and even strong VPN protocols are also limited to premium tiers. You will like Hide.me's free offering, without choking your internet speed and offers 24/7 support.

The Decision Is Yours!

Just because Opera VPN said bye bye does not mean you have to compromise on price or service. These free and paid VPNs are what you exactly count as the best alternatives to Opera VPN.